According to Alex, when he first arrived at Kuching and had his first western food here, he felt disappointed due to the lack of original taste as well as shocked by the steep price tag. Then he thought that “Kuching people are well deserving of having original and more authentic western food at a lower price”.

After making quite an appearance at Kuching Festival few years back, Let’s Pork Bistro is now serving you original western food in a humble kopitiam at Tabuan Keranji. 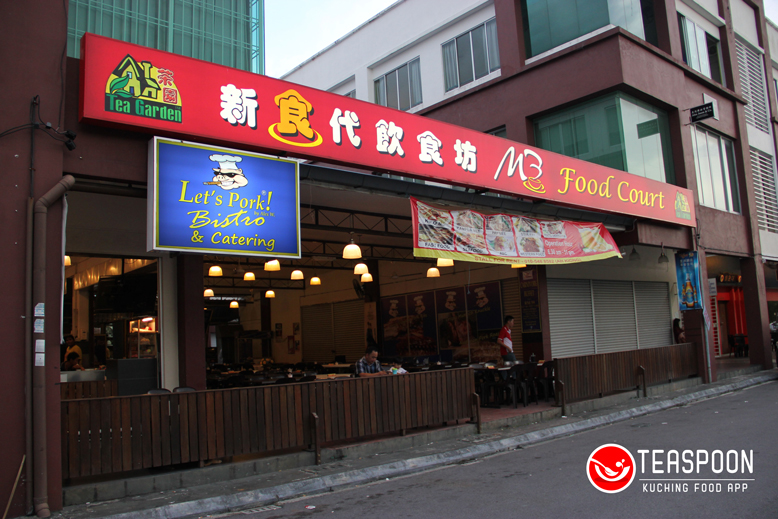 Although Let’s Pork Bistro is located within a kopitiam, you will still find yourself very comfortable having your meals here. The place is very spacy and well ventilated due to the extra fans that Alex requested from the owner of the kopitiam. And if you made a reservation prior to arrival, Alex and the staff will set-up your table just like you would know it from a hotel.

By the way, customers of Let’s Pork Bistro are entitled for 3 bottles of Estrella Beer at only RM15!

Let’s Pork Bistro offers their patrons pizzas, spaghetti, gourmet burgers, and their meaty main courses. If you can recall, Let’s Pork Bistro made quite the impression by bringing a homemade wood-fire oven to the venue of Kuching Fest. Or more accurately, it’s the one and only mobile Sicilian Wood-Fire Pizza Oven in the whole of Borneo. This oven is handmade with organic materials only: clay, bricks, water, and sand! There is no concrete and no reinforced steel used to make this oven. How awesome is that?

If you’re looking for real pizzas, this is the place to go because only at Let’s Pork Bistro can you find the only Original Sicilian Pizza in Kuching. Other than that, 95% of the ingredients used to make the pizzas are imported from Italy.

The Spaghetti Pork Aglio et Olio has a hint of spice and a strong flavour of the bell pepper striking your taste buds.

And, the Spaghetti Acapulco with Cajun Chicken & Mushroom

This Spaghetti Carbonara according to Alex is how an authentic carbonara should be prepared and served. The spaghetti uses fresh bacon and mushroom to cook, and then the heat is switched off once it is cooked and an egg yolk is added. This egg yolk further elevated the silkiness and creaminess of the carbonara.

Once we are done with the spaghetti, the star of the night, the Munich Pork Knuckle is served. This dish is served with Sauerkraut (a cabbage salad), mashed potato, and homemade brown sauce.

While we’re at it, if you’re a fan of mashed potatoes, you cannot afford to miss this one here. The mashed potatoes are very smooth and the sweetness of the potatoes along with the nutmeg produces a lingering taste in your mouth even after you swallow the mash potatoes. Mmm… Hmmm…! Perfection!

Then there’s the Pork Wiener Schnitzel, an Austrian National Dish.

After the Austrian National Dish, Chicken A La Mode served with bacon, mushroom, and cheese topping with sides and Alex’ Special Sauce is next on the menu.

Lastly, a plate of gigantic mix grill that makes our jaws dropped arrived on our table. This Vienna Mixed Grill can normally fill the stomach of 2 to 3 hungry customers. If your friends and families have smaller appetite, this mixed grill might even be enough for the 4 people!

Other than the gigantic portion, the taste is also absolute perfection. The ribs itself is beyond comparison.

Unlike many other restaurants, Alex does not adjust to the local taste and insist on serving the most authentic Western food so that Kuchingites can learn to appreciate the original taste. This is also why Alex insists of not using one tiny bit of MSG and all the sauces are made from scratch.

While we were having our meals, we noticed that Alex will ask each tables about the food and if there are any problems with them. When the plates of the customers are slightly dry, he will also offer to give extra sauce to go along with the rest of the food.

The way Alex treats his customers with high hospitality amazes us, and according to him, the greatest motivation to continue serving original western food comes from the smiles and expression of satisfaction when the customers had their meals.

At the end of the night, we were very satisfied with the FEAST that we just had. Therefore I urge you all fellow Kuchingites to come and try the foods at Let’s Pork Bistro, because if you’re as much of a meat lover as I am, then you’ll love the food here!

More foodie info, only at Teaspoon 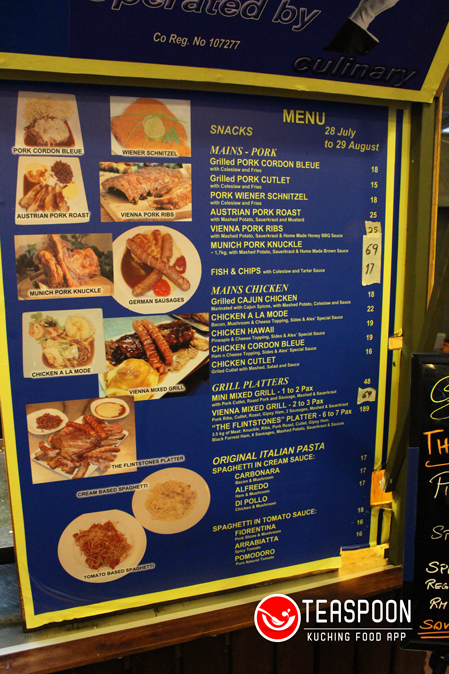