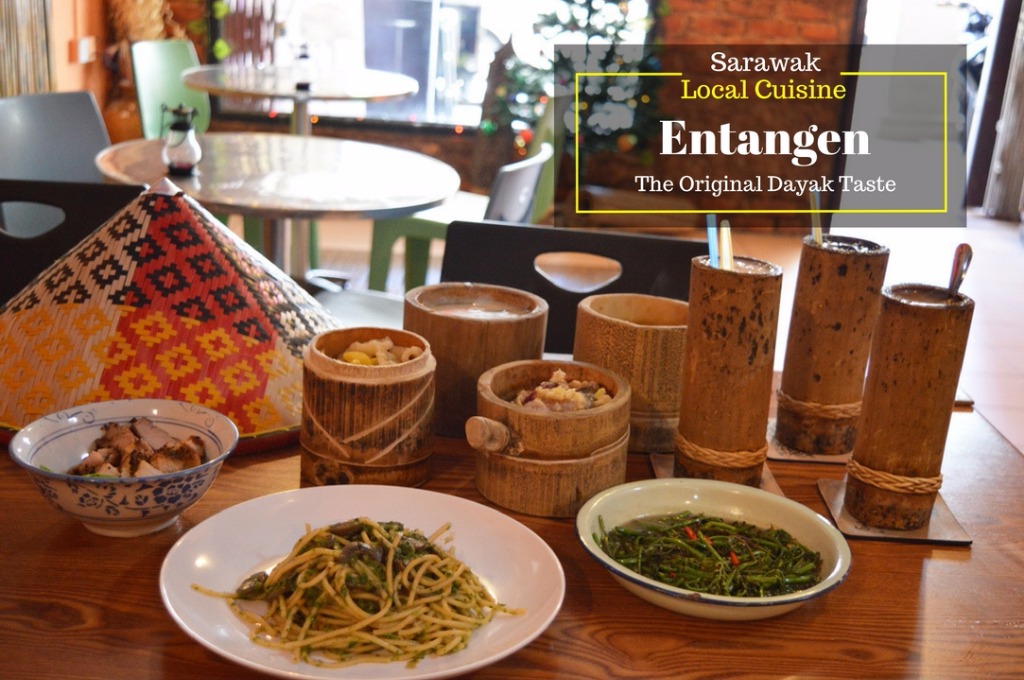 As a Sarawakian, we are living in the luxurious food paradise where we can enjoy many different genres of cuisine. But among all these different cuisines, do you also love Dayak cuisine as much as I am?

One thing’s for sure is that everyone from Entangen loves Dayak food so much that they want to share it with all of you. Therefore, let’s see what Entangen has to offer~~

Before you mispronounce the name of the place, here’s how you should  pronounce it, “En-tan-ngen”. Or you’ll mispronounce it just like I did. Well…… Bamboo cooking! Bamboo is used to cook most Dayak dishes where foods are put inside the bamboo and cooked with a small open fire to add extra aroma and taste to the food. Other than the use of bamboos, different type of leaves is also used in most Dayak cooking.

Entangen did not stop at only using the bamboos to cook, but they also specially prepared bamboo cups and ‘bowls’ to serve their food. The bamboo not only acts as a medium to contain the food, but the bamboo also actually allows the food to stay hot for a longer period of time!

First dish that we would like to recommend is the Bamboo Pork. Other than the pork belly, the dish also includes some turmeric that adds a different layer of taste to the dish.

Then there’s also the Keli Tempoyak that uses catfish that is already fermented to prepare. The flesh of the fish is super smooth and tender, the soup that goes along the dish is just so light and delicious that you could finish it on your own. 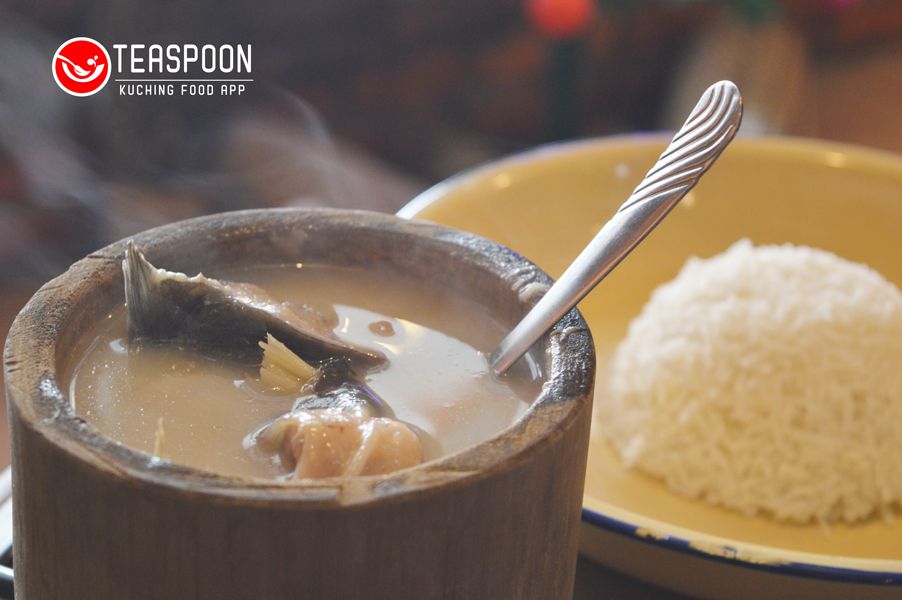 One vegetable that can directly represent Sarawak is definitely the Midin. The chinese loves a dish where Midin is cooked with Red Wine, while at Entangen you can find the Midin Tuak! I believe this requires no further explanation, but only need to ask you to head there immediately now. 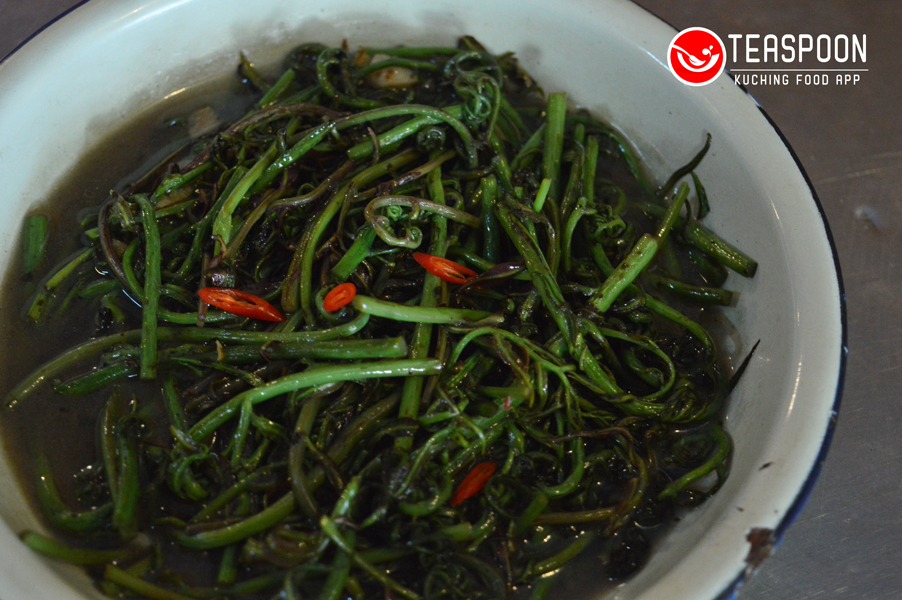 The one thing that makes me so deeply in love with Dayak cuisine is their smoked pork. Of course, Entangen also has Smoked Pork for you. Is their smoked pork delicious? Absolutely. The pork is smoked for more than a day and a lot of spices is added to bring out the best of the delicious pork.

Entangen is full of young people working together to achieve their dream, and constantly, they are also trying out new dishes to add more excitement to authentic Dayak dishes. That’s why you can find this interesting Dayak Fusion dish called Spaghetti Tapioca Leaf. Tapioca leaves are smashed and cooked with spaghetti to produce this extraordinary dish. 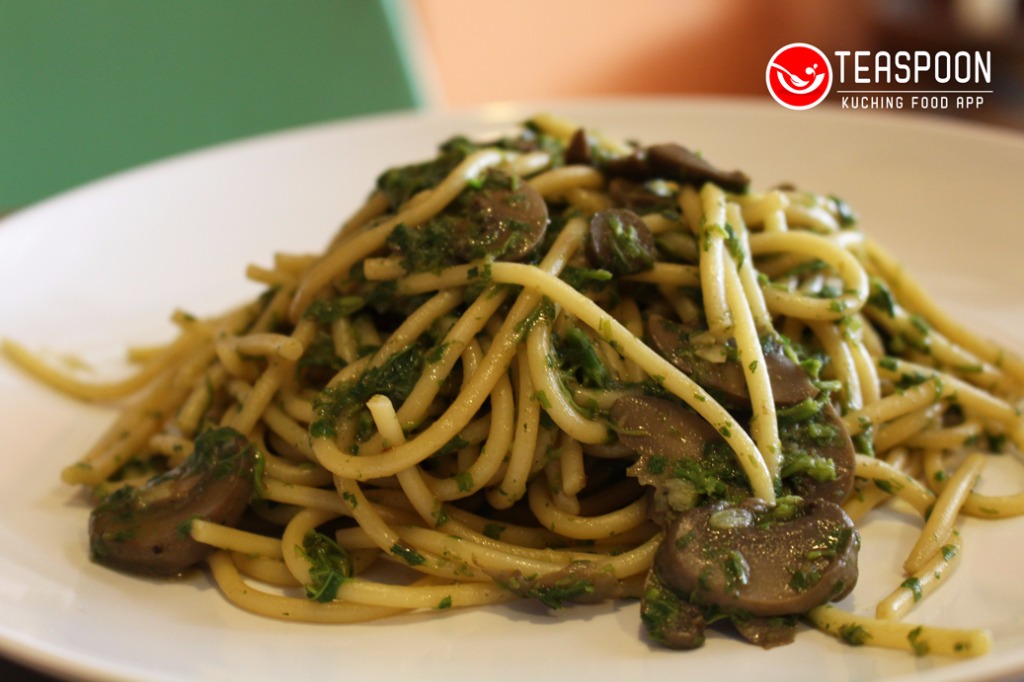 You should also try the Terung Asam at Entangen especially if you’re a fan of sour food. Sour Eggplant is cooked for 20 to 30 minutes to force all the acidity of the eggplant out and being absorbed by the soup and whatever meat that is included. This dish is very suitable to open up your appetite! 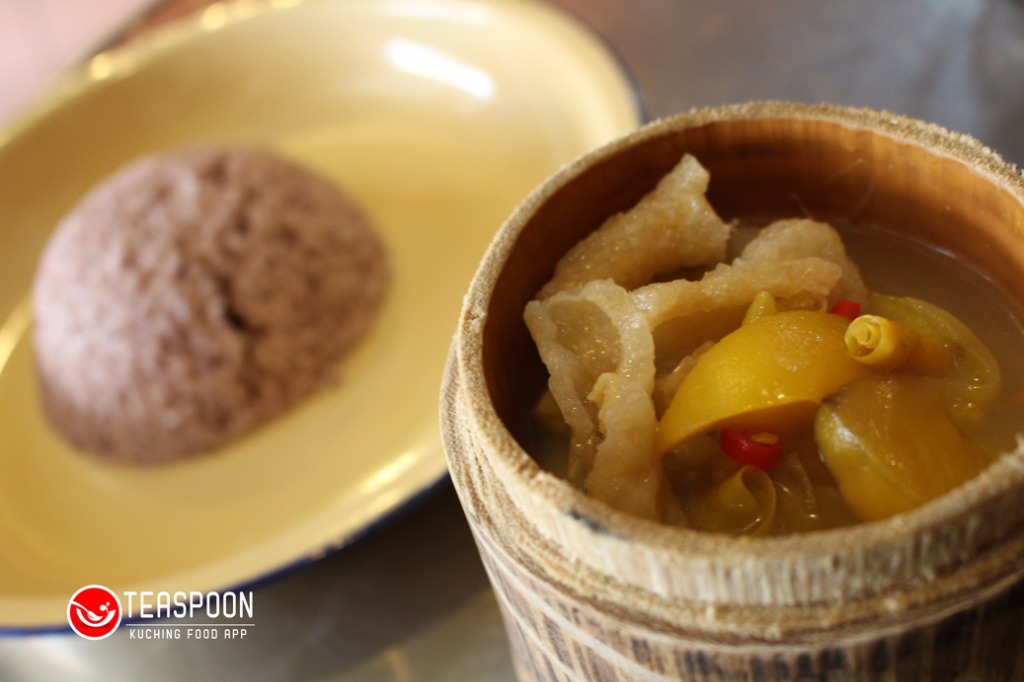 I’m sure many of you Dayak food lover would’ve guessed, and yes, one last dish that we would like to introduce you is the Kasam Ikan. This is almost the equivalent of sashimi of Dayak food, the only difference is that it is fermented and preserved for 2 to 3 months before serving. How could you miss this dish, especially if you’re not from Sarawak? 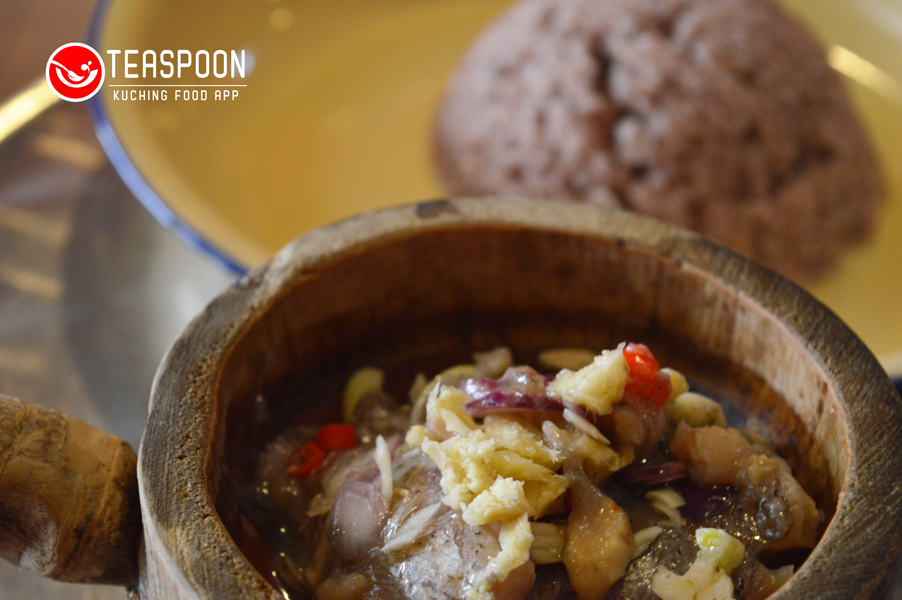 Entangen also have coffee that are cooked in bamboo! What?? WHY? It’s because this will allow an extra layer of bamboo fragrance to be added to the coffee. But you need to drink it before it gets cold, or all the aroma will be lost. 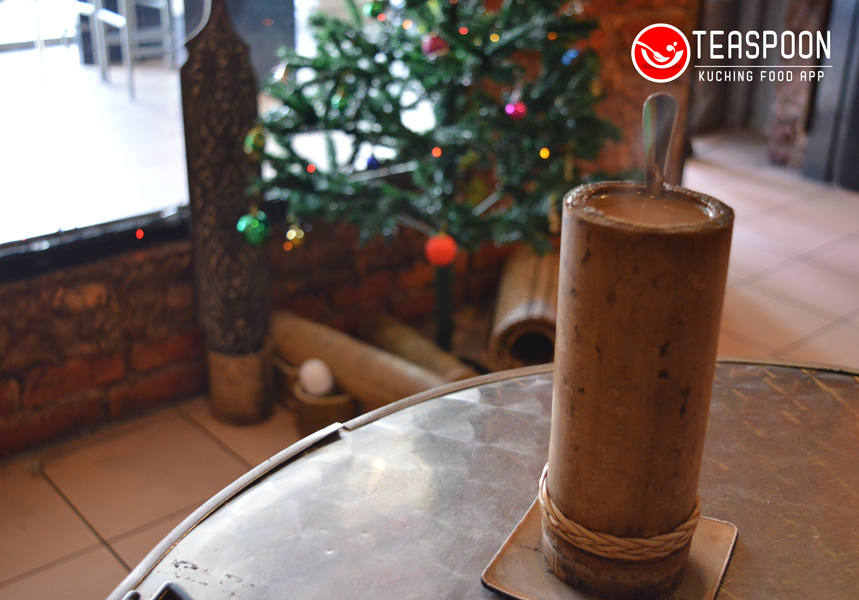 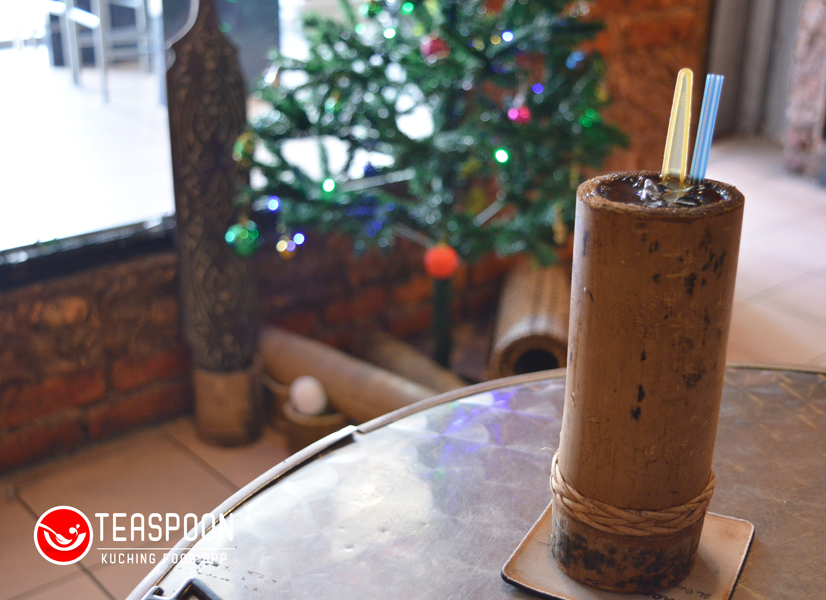 Tuak? Of course they have tuak. As the matter in fact, you can even purchase more than one and maybe bring it home to your friends or relatives.

So, those of you who have not tried Dayak food, are you up to the challenge? Head over to Entangen now! And remember to ask for the 20% discount when you join as Entangen’s membership in the Teaspoon Loyalty Rewards program. 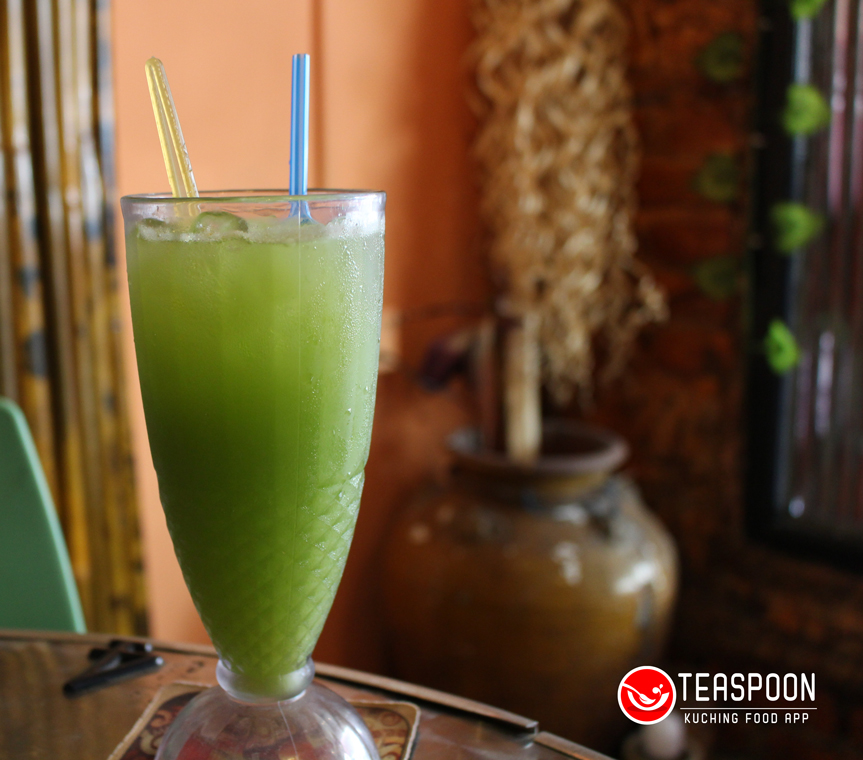 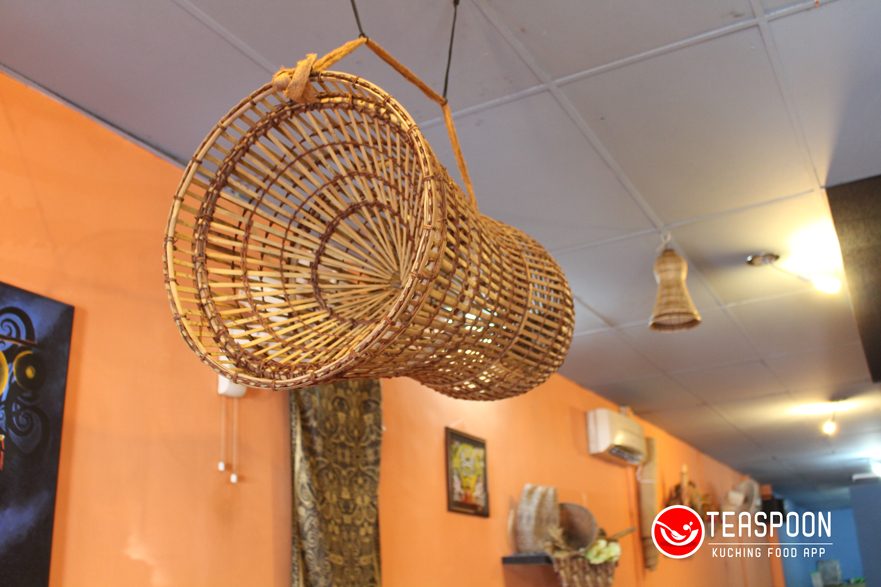 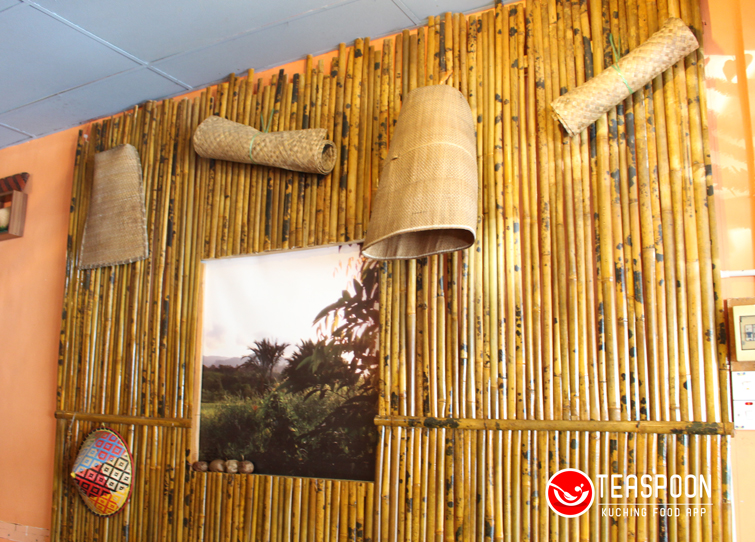 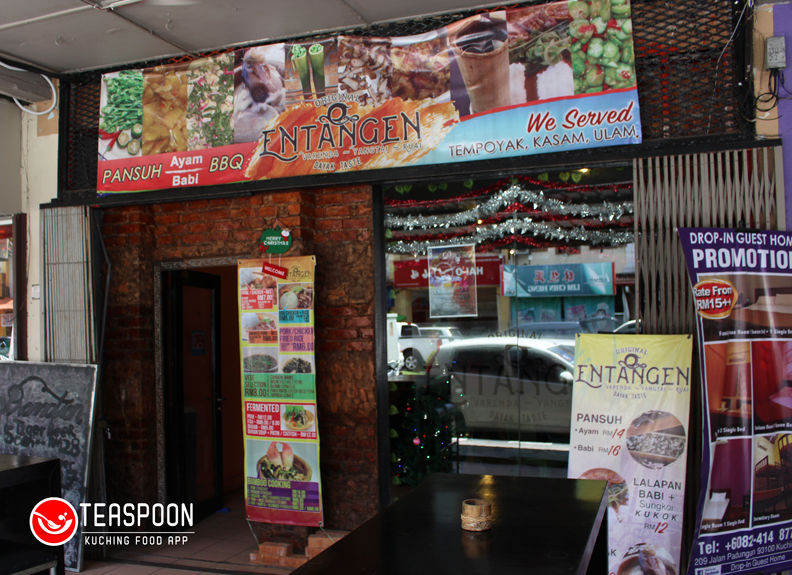